There has been a lot of information in the news lately about the nuclear crisis in Japan. Although there is great concern, there is also some irresponsible journalism taking place. I did some research recently in an attempt to better understand the facts and get past the fear-mongering. I present that information here, in an attempt to illicit a discussion. Please note, I am not an expert. If you have differing or more current information, please leave comments below.

One should not downplay the seriousness of the situation at the Daiichi plant, which has already seen explosions, releases of low levels of radiation, failure of cooling systems, and damage to the nuclear reactor. There have been news reports, however, of some highly unlikely worst case scenarios. To understand the probability of an absolute catastrophe, let’s look at the facts. The Cosmic Log describes the worst case scenario:

“Authorities can’t cool down the cores, and temperatures rise to the point that the uranium fuel melts into a mess on the bottom of the pressure vessel. The concrete-and-steel containment floor beneath the vessel has been built to contain a full core meltdown — but experts can’t completely rule out the possibility of a breach that causes the highly radioactive material to escape into the environment.”

To better understand this, let’s look at how the reactor itself is constructed. The Cosmic Log goes on to describe:

Under normal conditions, the plants produce power by sustaining a controlled nuclear reaction inside a pressure vessel. Chain reactions in the nuclear core’s uranium-filled fuel rods heat up water, generating steam that turns turbines to generate electricity. That steam is circulated through a cooling system and returned to the pressure vessel as water to keep the cycle going. The uranium oxide fuel is contained inside sheaths of zirconium metal that can withstand temperatures of 2,200 degrees Fahrenheit (1,200 degrees Celsius).

Control rods can be inserted between the fuel rods to shut down the main chain reaction in the uranium. But the water-circulating cooling system is needed as well to bring the temperature down while the radioactive decay subsides.

The earthquake caused power to be cut off  at the cooling system. The subsequent tsunami knocked out the backup diesel generators. The backup batteries, the last resort, only lasted for eight hours. With the power out, residual heat from radioactive decay continued to build up, and water continued to turn to steam. Over time, this caused the fuel rods to become exposed. The temperatures apparently reached the melting point for the fuel rods’ zirconium sheaths, which can result in uranium oxide fuel falling to the bottom of the pressure vessel. This is what some experts mean when they talk about a partial meltdown.

There were reports of explosions at the plant, but it is important to understand that they were hydrogen explosions. Bad Astronomy clears up the confusion:

“These were not nuclear explosions! That is literally impossible from a fission reactor; the fuel is the wrong kind and doesn’t have sufficient quantities to explode like an atomic bomb. Instead, the explosions were due to hydrogen combustion, created when water came into contact with the extremely hot fuel cells.” 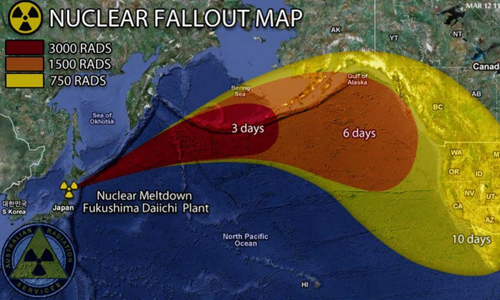 Unfortunately, someone created a map claiming to illustrate the spread of a radiation cloud from potential fallout. This map has been thoroughly debunked. It is a complete fabrication. It is physically impossible for a nuclear reactor like this to release such a cloud of radioactivity. Per Bad Astronomy: “People remember Chernobyl, of course, but the Japanese reactor is a very different design, and cannot explode the way the Ukrainian reactor did in 1986.”

In contrast, using an atmospheric modeling tool developed by the National Oceanic and Atmospheric Administration, weather expert Jeff Masters has attempted to predict where any potential radioactive plume from the Fukushima Daiichi plant might go. The vast majority of times he runs the data, the plume stays over water for five to seven days prior to landfall. On his blog, Weather Underground, he writes,

“Such a long time spent over the ocean means that the vast majority of radioactive particles would settle naturally or be washed out of the sky by precipitation. It is highly unlikely that any radiation capable of causing harm to people will be left in the atmosphere after seven days and 2000+ miles of travel distance.”

Masters also noted that the Chernobyl disaster, which involved a release of much more radiation than has been the case so far in Japan, spread significant contamination about 1,000 miles. President Barack Obama has spoken out on any potential danger to residents of the US in a televised statement:

“We do not expect harmful levels of radiation to reach the United States, whether it is the West Coast, Hawaii, Alaska or U.S. territories in the Pacific. That is the judgment of our Nuclear Regulatory Commission and many other experts.”

Regardless, many US residents are beginning to take potassium iodide tablets as a counter-measure against any potential radiation exposure. It is important to understand what this measure actually does to the body. Potassium iodide tablets specifically saturate the thyroid gland with iodine in an effort to keep it from taking up any radiative iodine that may be present in the body. Health officials warn potassium iodide can pose its own risks if misused. State health officials don’t know how many people are preventatively taking potassium iodide, but they strongly discourage taking the medicine. It carries its own side effects, especially for people who have allergies to iodine, shellfish or have thyroid problems. Donn Moyer of the  Washington State Department of Health stated to Reuters:

“People should not take it anywhere in North America for the things that are happening in Japan.”

In a joint statement, health officials said that potassium iodide can have negative health effects when taken during occasions that are not considered radiation emergencies. These include allergic reactions, rashes, salivary gland inflammation and hyperthyroidism or hypothyroidism in rare cases. Those already with thyroid conditions should be especially cautious.

In conclusion, it appears that there is not much for us to do now in the US to protect ourselves and our children from potential radiation exposure. Monitoring the news and educating ourselves with the facts are the best courses of action at this time. Again, as more current information comes in, please leave comments below.