Created by Joss Whedon and David Greenwalt as a spin-off to “Buffy the Vampire Slayer,” the TV series “Angel” ran from 1999-2004. David Boreanaz starred as Angel, the vampire with a soul who battled evil and helped the downtrodden in Los Angeles.  It gave us one of the best finales of any TV series in my opinion. That last episode “Not Fade Away” may also have inadvertently revealed the meaning of life.

During the final season, Angel and his companions were running the Los Angeles branch of the evil law firm Wolfram & Hart. By becoming part of the machine, they were trying to dismantle the evil powers that be from the inside. It was revealed that The Circle Of The Black Thorn was the most powerful evil group in this plane of existence. Our heroes thus planned to take down this power-elite of the apocalypse, all on the same night. The mission seemed impossible, and would not be without dire consequences. A recurring theme of the episode, that “the struggle goes on,” was highlighted in an early scene as Angel tried to recruit an old nemesis for his plan:

Angel: It’s not about us, it’s about them … the one’s we’ve been fighting against forever.

Lindsey: And what if you roll snake eyes … Believe it or not, I was actually talking about you. Do you care about being squashed like a bug?

At night they would put their plan into action. That morning, however, Angel gathered his group together. He told them to take the day off. “Live the day like it’s your last, because it probably is.” So each character used the day to do something meaningful for themselves. And here’s where it gets interesting. In life, you need to find meaning whenever and wherever you can. For me that includes TV shows, and if you’re open to it, sometimes you get a truth explosion. One character, Gunn, went to visit his friend Annie who runs a homeless shelter. Their exchange somehow still resonates with me to this day.

Gunn: Annie, how you doin?

Annie (loading  a truck): Pretty good I guess. Got a bunch of furniture donated. Gotta move this stuff to the new shelter.

Annie: … it’s not so bad. We’ve had some really decent donations and it’s helping. We actually have a part-time paid psychiatric staff.

Gunn: What if I told you it doesn’t help. What would you do if you found out that none of it matters. That it’s all controlled by forces more powerful and uncaring than we can conceive. And they will never let it get better down here. What would you do?

Annie (unfazed): I’d get this truck packed before the new stuff gets here. Wanna give me a hand?

The saying goes that life is a marathon, not a sprint. But I would rather go with a boxing analogy. There will be no early knockouts; nobody gets out of this easy. Life is like a full 12-Round Championship bout. You’re going to have to fight through every single minute of it. You can only try and win this one on points, and you’re going to have to struggle for every point you get. The movie “Rocky” comes to mind. Many people forget he didn’t even win at the end of the first movie. His victory was just showing that he could make it through the fight at all, that he could stand toe-to-toe with the strongest and survive.

As parents, we always worry about the state of the world. We worry about what things will be like for our children, and their children after them. What if it is all controlled by forces more powerful and uncaring than we can conceive? And what if they will never let it get better down here? We can’t give up. We just can’t, our kids are too important. All we can do is get up everyday, roll up our sleeves, and fight the evils of the world the only way that we know how. And as we do, we try to leave our mark. When it’s all said and done, if we can leave the world a little better than we found it, then it will all have been worth it. 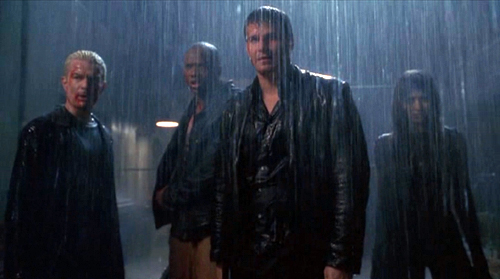 The final scene of the episode has our heroes meeting up in a rain-soaked alley, trying to regroup. They have defeated The Circle Of The Black Thorn. But for their crime, the evil Powers That Be are about to bring an unholy onslaught against them the likes of which have never been seen; the likes of which they have little chance of surviving. Unfazed, our heroes prepare for what’s next. The fight simply goes on:

Have you had any TV truth explosions? What shows have helped you see things in a different way?

9 thoughts on “Dadutainment: The World Is A Vampire”