It’s funny how kids get attached to things. Our daughter was never into pacifiers, or “binkies” as some would call them; however, she did get attached to her stuffed animals quite early. We call them her “guys.” When we go out, we always ask her, “Where’s your guys?” Her entourage must always be in tow. Though by now this has gotten way out of hand, it all started simply enough.

Piper’s first lovie was a stuffed lamb my mother-in-law bought her. It was an adorable little thing, white with a yellow ribbon around its neck. She called it “Mimi” because she was too little to say lamb at the time. We thought it was cute how she would sleep with it, and would start to carry it around the house with her. Then there was Clyde, the little orangutan, but he was really our favorite more than hers. I mean, c’mon, his name was Clyde.

“Any which way but juice?” 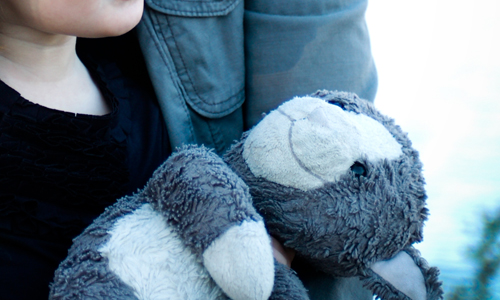 This is Kitty Kat. Everything changed when he came on the scene, sometime around the fall of 2009. We still remember Piper walking around in the backyard with her cousin at Thanksgiving, wearing her “Where The Wild Things Are” t-shirt and proudly carrying her new best friend. Things were never the same again. She takes that cat everywhere with her. Everywhere. We would sure be in trouble if anything ever happened to him.

Originally, when we got him, Amy had actually hid Kitty Kat in the closet because Piper had already gotten a care package that week. So we tried to save the new stuffed animal for a rainy day. But Piper dug around in the closet when we had our backs turned and that was that.

Kitty Kat came from one of those book deals they sometimes have at Kohls. He’s the cat from “If You  Give A Cat A Cupcake.” So, of course, that was just a temporary deal and we probably couldn’t find another one even if we wanted to … or maybe for hefty price. Thus, we were so afraid to wash him, lest something irreparably bad happen. But after a couple of years, he got so gross that we just had to do something. I went ahead and put him in the washing machine one day when Amy was at work. This was pretty daring, because if he didn’t make it out alive, I would have had to deal with the impending meltdown all by myself. But I made the plunge anyway, and I am happy to report that Kitty Kat came out with flying colors. Or at least his old color. In any case he’s fine.

We don’t really worry about spoiling our daughter, but the thought does come to mind at times. Maybe that’s because, for instance, we had to buy a tent for her room to put all of her guys in. We call it “Guys Tent,” and of course Kitty Kat is the king of Guys Tent. It’s bittersweet to me the degree that she is attached to him. As much as I see the pure joy he brings her, I know that this time will not last forever. The movie “Toy Story 3” did a wonderful job of showing the sense of loss kids feel when they lose or have to give up a beloved toy. These guys really are companions to little kids. They share so much time with them, talk with them, have adventures with them. As long as she has Kitty Kat, Piper will always be our little girl, still full of childhood innocence. The day that she outgrows Kitty Kat—that will be a sad day, indeed … for all of us.

What is your child’s favorite lovie? What would you do if something ever happened to it?

20 thoughts on “Bittersweet Memories And The Origin Of Kitty Kat”