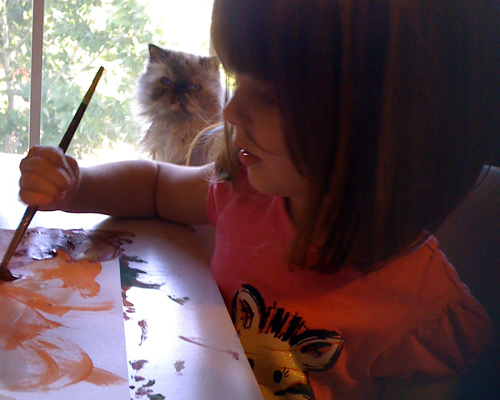 As I’ve mentioned before, although Piper and I engage in what can most commonly be described as “free play,” my wife is more likely to engage her in structured and civilized activities. Recently, Amy taught Piper how to paint. She loves it. Now every painting is her masterpiece. She always asks, “Mommy, can I work on my masterpiece?” Her latest, the one below, is called “For America.” Actually, for some reason they’re all called “For America.” Kind of appropriate in light of recent events. In any case, mom has raised the bar yet again. It’s hard to compete with that. 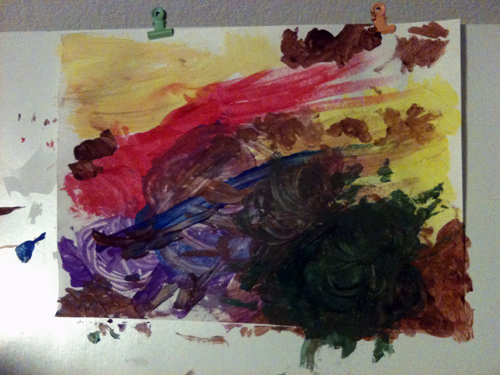 Last week I gave it a go, however, with an effort toward more structured play. At Piper’s behest, we made a “train.” We have bamboo boxes in her room that we keep all of her books in. She had me take them down and dump out all of the books. Of course this made a huge mess, but if that’s what the girl wants….

She placed the boxes in a line for the train cars. Then she made me get some guys out of Guys Tent to be the passengers. She called me Mr. Conductor for the rest of the day. “Can you make it go, Mr. Conductor?” So off we went, for some adventures on the Piper Express. We ended up with so many guys, we had to queue them up. There was actually a line of guys waiting for their turn on the train. 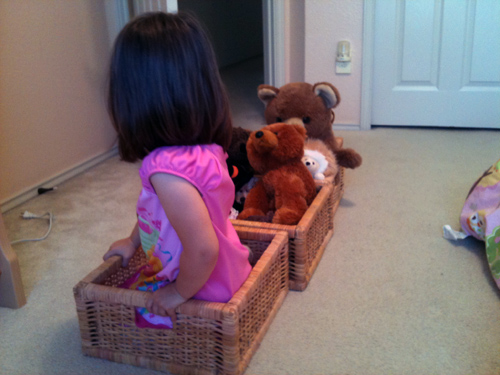 After lunch, Piper wanted to make her “Giant Robot.” She got the bamboo boxes out again, except this time things got vertical. She put her little plastic vegetables on them at one point. I don’t know if they were supposed to be hair, appendages or other features; I just decided to go with it. She called it her Giant Robot. There was no queue for this adventure, however. This time the guys were on their own. Here she is admiring her work. 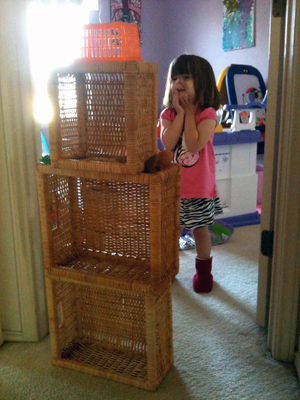 There are so many different aspects to raising a child. Discipline, potty training, language skills, etc. Maybe I’ve just seen “Inception” too many times, but I think that facilitating creativity in children is right up there in importance. Many things in life can be solved simply by working hard and using a little creativity. It’s a fundamental building block for developing basic problem solving skills. They say that resentment is caused when expectations are not met. Expectations themselves come from a set perceived outcome to any given situation. We can’t all be like the guy from the movie “Limitless,” who can see all of the conceivable possibilities for any circumstance all at once. Nevertheless, through creativity we can open our minds to more contingencies than we would otherwise, thus giving ourselves a fighting chance at making it through the day unscathed. If you’re like me, being a parent throws more contingencies at you than you ever thought were possible on a daily basis.

“No scenario? I see every scenario, I see fifty scenarios. That’s what it does … it puts me fifty moves ahead of you.”

You may notice the conspicuous absence of a certain Mr. Kitty Kat in these pictures. It’s true, Kitty Kat was nowhere to be found. Piper had all of these adventures without Kitty Kat to share them with. What happened to him? Well, let’s just say that later on he got more than he bargained for. Tune in tomorrow for Kitty Kat’s side of the story.

3 thoughts on “Piper’s Masterpiece vs. The Giant Robot”