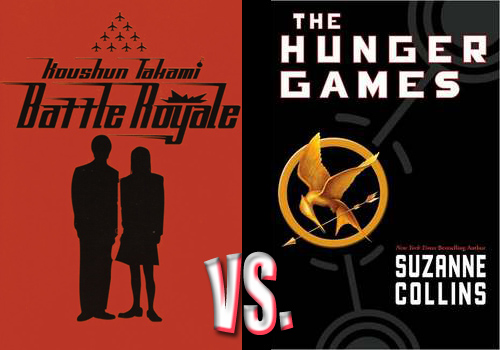 The other day I mentioned in a post that I was reading The Hunger Games series. Angela commented:

“Enjoyed the premise. But, the writing. BL-EH. No real mystery. Over explained. Nothing for the reader to figure out. Indicative of juv fiction or just bad writing? The whole over-dramatic love triangle…Ya, yah, it’s juvenile fiction. But, why all the adult buzz?”

There are some valid criticisms there. For myself, I quite enjoyed reading the first book. The premise, while not completely original (more on that in a second), is extremely compelling. The writing was easy to read, and was not overly descriptive, which I like. Author Suzanne Collins did have a tendency to depend on reflection a little too much. It seemed that the reflection was at times overly obvious and thus redundant. Like Angela said above, overly explaining things leaves little or nothing for the reader to figure out. Of course, this is categorized as a young adult novel and was told from the first person point-of-view, so that explains many of the choices that the writer made. I mean to take nothing away from the young adult genre, it’s just that some things obviously would need to be explained or developed differently for a younger audience.

I only had two real issues with the book: (1) the love triangle did feel forced to me, and (2) after everything that happened I think the main character should have showed greater change by the end, had a greater emotional arc so to speak. But up until near the end of the denouement, the action was amazing. Suzanne Collins has the knack to end chapters with great hooks that make one desire to keep reading. I have read many comments online by readers that stated, “I just couldn’t put the book down.”

I mostly wanted to read The Hunger Games because the concept reminded me of a book I read by Japanese author Koushun Takami called Battle Royale. This book predates The Hunger Games, having been published in 1999. Both stories share the same premise: a group of young people are forced into an arena by an oppressive government to fight to the death. There can only be one victor. While both books explore the effects of war and violence on young people, Battle Royale focuses more on the actual battle, and The Hunger Games pulls back and gives a much broader view of the dystopian society itself.

Personally, I enjoyed Battle Royale a lot more. It’s more gritty and realistic, and thus more brutal. It’s not that I enjoyed the brutality, I mean that it was more effective in getting the point across. Think of The Hunger Games as Joel Shumacher‘s Batman Forever, while Battle Royale would be Christopher Nolan’s The Dark Knight. Also, The Hunger Games is more science fiction and fantasy oriented. There are many fantastic and dangerous creatures that don’t exist in our world, while Battle Royale is more entrenched in realism. The Hunger Games also spends a surprising amount of time not actually in the games. I may be wrong, but the games as an event made up about a third of the book itself. The battle in Battle Royale is essentially the entire book, so you get into the action right away—and there is no Twighlit-y love triangle in this one.

Let’s put it this way: The Hunger Games is being made into a major motion picture. It will likely be rated PG-13, and will be widely distributed in North America. Battle Royale was made into a movie in Japan in 2000. Although the film was not actually banned in North America as rumor would have it, a deal could never be reached to distribute the film in the United States. This film would not have been PG-13 in North America if it had been released here in 2000. (Note: the film is now available for rental on Netflix.)

To sum up, if you liked the concept of The Hunger Games, I would strongly recommend checking out Battle Royale.

2 thoughts on “Battle Royale vs. The Hunger Games”