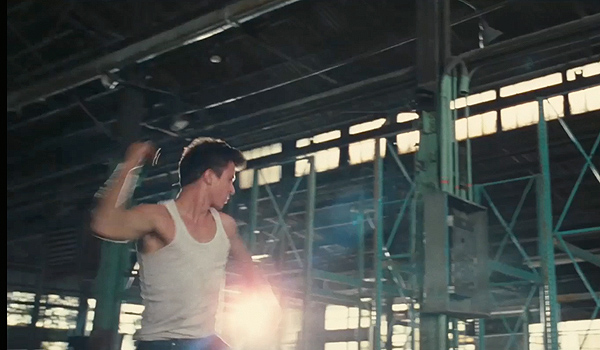 Apparently, Hollywood doesn’t have any original ideas anymore. You just can’t get away from the remakes, which are all the rage these days. I just saw a trailer for the new version of Footloose. It started out in the same vein- a small town with a bunch of grumpy adults who won’t let the kids have any fun. Some guy tells the new kid in school, Dancey McGoodhair, “Public dancing is against the law if you’re under 18 in Beaumont.” Uh oh. But then I noticed something. It looks like they might have recreated the famous punch dancing scene from the original film. Aside from the obvious questions of: (a) why did they do a remake of Footloose, and more importantly (b) why did I watch the trailer, is this- (c) if this scene is really in the movie, will this herald the return of punch dancing?

A way to release anger through dancing, punching, and kicking, at the same time in a deserted area.

The first known evidence of punch dancing was in the original Footloose, released in 1984. Kevin Bacon had a scene where he went off…smoking, dancing, and punching away. Audiences didn’t know how to handle this display of raw energy at the time, but they came around. Billy Idol kept this anger management technique alive through the 80s by including it some of his music videos. Forgotten for some time, punch dancing was later revived in the 2007 film Hot Rod, in which Adam Samberg recreated that famous scene from Footloose. As before, audiences were both amazed and a little frightened by what they saw.

Since then, the world has had a mostly back and forth relationship with punch dancing. It took a hit when Journey songs were featured prominently on the TV show Glee. Don’t get me wrong, I’m all for Glee going to the classics. However, the musical theater aspect of it all really takes away from the subversive roots of some of the songs. And thus, we’re left with no allowance for punch dancing. But have no fear, there are those that won’t let it die, like Jorma Taccone of The Lonely Island. There is a series of YouTube videos out there, where he punch dances away to the sound checks of various bands as they get ready to appear on Saturday Night Live. And Bill Hader is always there, watching, just shaking his head.

Personally, I never really learned to punch dance. But I did do some mean “rock arm” back in my day. Before the house, before the kid, everything was all so simple then. All you really needed was too much hairspray, maybe an armband, and a good mix tape. Then all you had to do was press play, and everything was right with the world. Journey, Night Ranger, and Sammy Hagar are all excellent choices for some good “rock arm” time. Still, rock arm can only blow off so much steam. Sometimes I think maybe it would have helped alleviate more depression if I had acquired some appropriate punch dancing skills. However, the advanced techniques are difficult to learn, and can be dangerous for those overly ambitious enough to take on. And so, I was stuck with rock arm. As an example of what too much rock arm can lead to, I give you this song below. Just a simple 4-track demo, let it serve as a cautionary tale.

In the teaser trailer for the new Footloose, Dancey McGoodhair stood up in the town hall meeting and said in his heavy Boston accent, “This is our time.” All I can say is, “Yes it is, Dancey. Yes it is.”

11 thoughts on “The Return of Punch Dancing?”